Just made some weird brushes that create randomised shapes. Then I turned the shapes in to forms and made a scene out of it. That is all.

Posted by Mark Button Design at 05:01 No comments:

Boom! Below are some new racing vehicles designed. Did a few colour passes. Gone a little crazy with the green and pinks...

Posted by Mark Button Design at 08:45 No comments:

So here are two yes two! renders for my T2 design. With more time and development I'd have added pivoting jets to allow it to have increase stability when needing to hover in position. Any ways... hope you all like it. Maybe another attempt at a movie could be done like this.

Posted by Mark Button Design at 05:45 No comments:

Here is the model Ive been making based on the initial sketches. Not much else going on here but the next step is to make a finished render :) 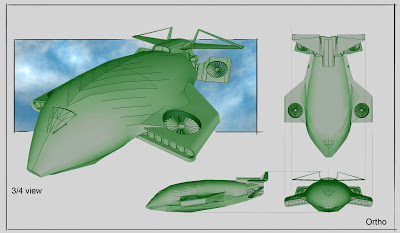 Posted by Mark Button Design at 05:09 No comments:

OK so I didnt think I'd ever do this but I had a go at a redesign. For some time after the unfortunate passing of Gerry Anderson I wanted to do something Thunderbird related. Early last year, talk was going around that Mr Anderson was working on new Thunderbirds (likely to be in the CGI styling of the new Captain Scarlett.

While nothing can improve on the original series, I would have loved to work on the series and after asking around a bit, word was the series had been cancelled...

Now though I wanted to try a redesign. Thunderbird 2 was probably my favourite design and for some time I felt I couldnt even bring a new design to the table that would improve the existing one. Once I got over the fact that I wasnt actually getting to redesign and ruin the old design, I finally thought of it as more of a personal re design in todays world. With todays vehicles actually able to produce vertical take-offs and the rather fine military style of the aircraft in Avatar, I saw a way in to designing T2 so it still resembled its bulky body but could work in a movie world.

These are the intial sketches for now. For now the middle one stand out but some features may come together from the sketches too. Anyone want to put their words to what would be good feel free to comment below...

Posted by Mark Button Design at 06:38 No comments: 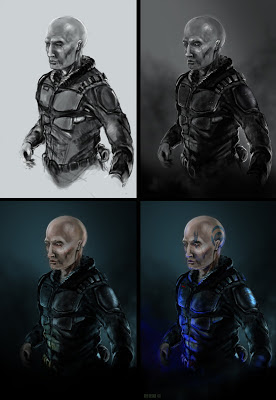 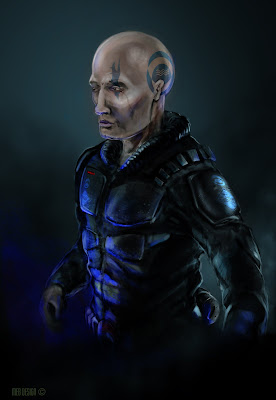 Posted by Mark Button Design at 09:09 No comments:

Done my first creature design of the year. This was quite a fun quick process. I should really do more of these as I lack creature/organic/living things in my portfolio. The larger image is on my actual site here and on the Misc page on here 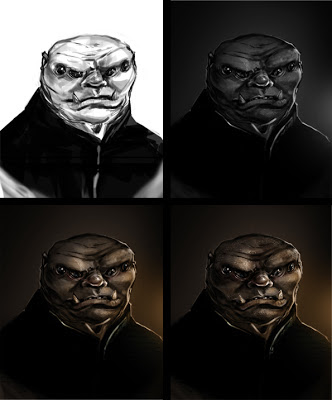 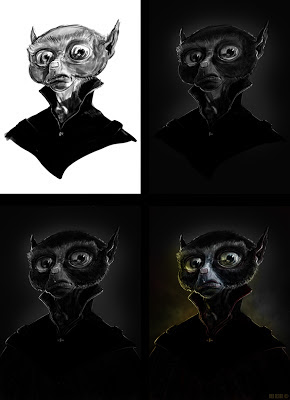 Posted by Mark Button Design at 04:41 No comments:

OK so from the previous post based on small post stamp sized comps, I took 3 that I liked, all with varying colour palettes and compositions, and took them to a higher level of detail. All 3 were painted similtaneously. Enjoy

Posted by Mark Button Design at 12:51 No comments:

This is a fun practice piece. Making oa grid of 10 canvas at a very low res, I wanted to fill each with a different location trying different colour palettes and see if I could produce some strong compositions. They are purposely loose and approximately about as big as a postage stamp. Some I think came out quite nicely and I may even work one or two up.

This is beneficial in two ways;
1 - I am practicing my colour understanding and composition skills (al-be-it with no real detail and at a small size)
2 - THis builds up a sketch folder I have where I bin leave every loose sketch, thumbnail, doodle etc for a later date where it may come in use like a mini portfolio of work in progress.

Anyway here are the initial scribbles 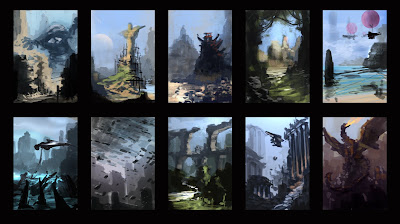 Posted by Mark Button Design at 06:25 No comments:

5. The Raid
- first I ignore the chat about it being the most interesting, original form of martial arts of the past 20 years. What you have here is just a great no holds action piece that crosses all languages. Exciting stuff.

4. Chronicle
- this proved to be a bit of a surprise. I had wanted to see this from the get-go but had to finally catch it on dvd. A fun novel way to use the 'hand held' footage style and a real life element to super powers I haven't enjoyed so much since Unbreakable.

3. Avengers
- the biggest surprise of the year. Had no real intention of seeing this in the cinema. Over hyped and I wasnt overly impressed with either Thor or Captain America as individual films. Then BOOM HULK SMASH. Also this was one of the better uses of 3D Ive seen.

2. Prometheus
- say what you want; Prometheus was the biggest anticipated film in years for many including me. Was it what we wanted; maybe not on first viewing but it was something else. Amazing design work and the usual depth you'd expect from Ridley Scott. Yes there are some muddled bits but for build up, excitement and the world created, I was happy.

1. The Dark Knight Rises
- nothing to say here really. I saw it 3 times in the cinema. It was my first IMAX experience and a great complete ending to a well built story arc.

And an honourable mention as always. This goes to Looper. Joeseph Gordon-Levitt is a great actor and to see him lead in a sci-fi film such as this that deals with time travel with no moment leaving you thinking 'what the...?'. Good film

Posted by Mark Button Design at 06:58 No comments: