As you can see I added the sky from a photo I had. It was a lovely evening shot with the red of the sun and the blue of the sky blending. It also helped me with lighting. As the sun was originally in the photo, it meant everything had to be backlit. This worked because with darkened buildings I could pump up the brightness of all the light effects i.e. signage, billboards, ambient lights etc.

Not totally sure on whether to add more yet. I added the car as a foreground element to hopefully give context and further define the low camera angle. 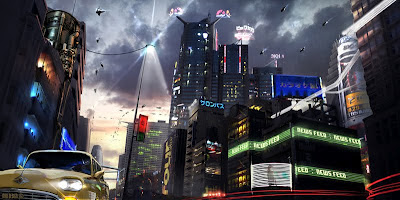 Posted by Mark Button Design at 10:35 No comments:

So with this post I have started with a photo plate. As the image below shows I started with a photo that didnt have a particularly strong light direction. This is often a favoured type of shot for Matte Artists as it allows for a lot more adjustment rather than if there was an obvious light source that you would have to stick to.

So my next step was to broaden the canvas I liked the height and layers to the buildings so by widening the view it would have a more cinematic appearance. I knew I wanted to go with a future city and use a photo I had of an evening sky which mixes orange and blue tones. Anywho, the only other stages at this point was to set up a perspective grid line so I would be able to add any additional buildings/props correctly. Some foreground buildings from other photos are used to border the shot and strengthens the low cam angle. 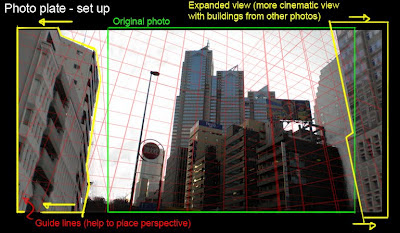 A change of scenery

So as I mentioned previously, I aim to take a small brake from over doing the sci-fi scenery so the first fresh piece I bring is of a japanese home. For this one I took the colour scheme and reference from a photo I took while over in Tokyo.

The first image shows the general arrangement I went for followed by the final piece with details. 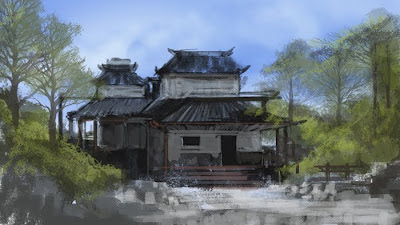 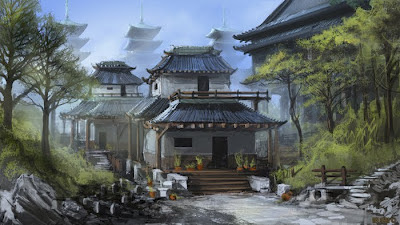 A larger view can be seen at my website in the environment dsection on the Personal Work page here.
Posted by Mark Button Design at 16:15 No comments:

The last landing (for a little while)

OK so this will be the last space ship or even space based design for a while (I promise) I have some fun stuff lined up instead. Below though was a fun experiment with a small bit of 3D modelling.

The first pic shows the front end of a (very) basic ship. For the colour scheme I took a picture off google of a snowy night shot. I knew I wanted it to have cold dark blue tones. 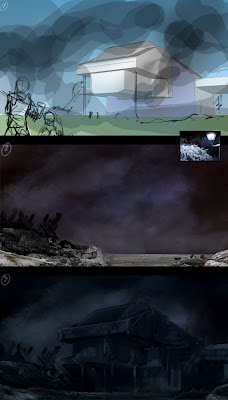 The finished piece is below and can be seen larger at my site here in the Vehicle section. 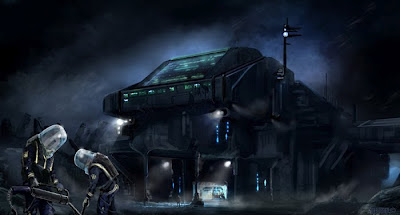 Posted by Mark Button Design at 03:31 No comments:

So here to break up the location designs and props Ive been working on I thought I'd put down some character work; something I rarely do (and should practice a lot more to be honest).

It started with some shilhoette forms that I xhose 3 to take futher. From there I started buiding up the details starting with a colour scheme. These were going to be bluse skinned aliens with red war paint.

What the design evolved into was an alien war suits that were linked by a similar motiff but differed by the structure of who was in charge. SO central we have a smaller guy who is the General type. He looks more regal and important with his head piece etc. Then there is the soldier types and the scout troopers :) nice little exercise... 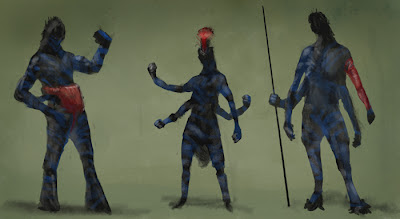 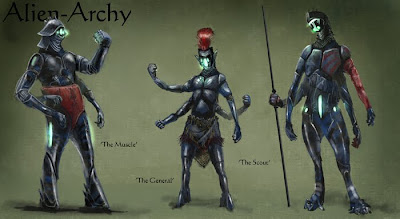 The larger finished image can be viewed at my site.
Posted by Mark Button Design at 16:34 No comments:

So although its only a brief update the final design is below. It can be view larger on my site.

Posted by Mark Button Design at 16:16 No comments:

Well Isaw Prometheus and did really enjoy thank goodness! A lot of mixed reviews showing up. Maybe I'll post a proper blog about it soon. As the intention always was with this blog; partly show off work and also discuss film.

Below though for now, is the start of a new environment design. probably close to an hours worth od doodling stuff. At this stage its a case of just topping up the details and fixing things but Im always willing to consider a major addition or change to the image. Thoughts as always?...

Also been playing with a great free drawing tool on the mobile (yes Im one of those 'annoying app guys' now!) Hopefully post the random little scribbles Ive done from time to time. Its great for quick greyscale tonal sketches. Would be a good exercise to take a drawing from the smallest of devices and turn it into a large image on a proper device (i.e. photoshop)
Posted by Mark Button Design at 08:39 No comments: