So as always Ive become crap at posting. Along with many plans I intend to post more work and ideas this year. Recently watched Cowboys vs Aliens which planted a visual in my head and actually an idea for an art book but thats just an idea at the moment. So here for your enjoyment is a warm up exercise inspired by Prototype and the sequel to the game (cleverly titled Prototype 2...) that comes out later this year. Here is some form of military official who is possibly infected. Done in 25mins. Going to do more of these as warm ups. Gives me more practice at characters too... 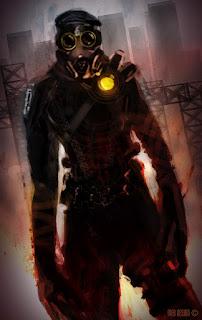 Posted by Mark Button Design at 13:05 No comments: