Quick reference painting practice to start the year off. 20mins-ish i think 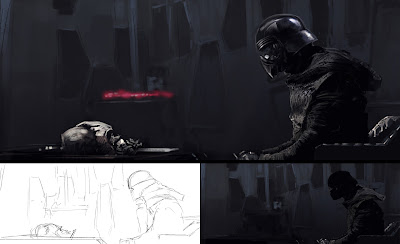 Posted by Mark Button Design at 15:21 No comments:

Well it's technically the 1st of the new year so I should have done this last week or yesterday. I was really hoping to fit in just a few other films I'd missed this year but that sadly didn't happen. Regardless, here's my personal top 5 that I saw and that were of course released in the UK during 2015. In decending order:

5. Big Hero 6
- yep that's right, a Disney movie! And in a year of a lot of animation, Ive put this above the likes of Inside Out and The Good Dinosaur. A fun film with such a well designed and fairly original entry in the robot catagory. I think this appealled because it felt like a Disney film I could enjoy that wasn't all about princesses or sisterly love. There's nothing wrong with that of course but after a mega hit like Frozen I'm glad they came out with this rather than playing off the success of that one film.


4. Kung Fury
- OK, so at 15mins, it's not techincally a feature film and could have easily gone into my 'honourable mentions' at the end of this. However this achieved such style, action and general fun packed nostalgia (somehing that appeared in a fair few of this years major releases), it's earnt it's entry due to its rewatchable quality. This probably doesn't need to be expanded to a full film and may just be a great calling card to Hollywood from it's makers. Either way, it's exciting stuff.

3. Whiplash
- again another great entry from right back at the start of the year (see Big Hero 6). Quite the Oscar darling back in February and for good reason. Steller performances all round but J.K. Simmons gets the limelight after so many amazing side performances and bit parts.

2. The Martian
- so after last years Intersteller, I was really hoping the sci-fi wouldn't let up and Im pleased to say this kept it going. Clearly a Ridley Scott film brings a lot of attention but this had added value having made Prometheus, which quickly became unfavourable in the fan and critic commuinities and Exodus, which is at this point kind of a standard of what to expect from one of his historical epics. This was easily the most light hearted and entertaining he had been since Thelma & Louise. Matt Damon is on point and the script is great. Ultimately after Interstellar and Gravity, space finally looked fun as well as perilous!

1. Mad Max Fury Road
- few would disagree. Few also seemed to expect it. It's really of little importance but there's a lot of online response that suggests the MM bandwagon was jumped on pretty hard with few people aware or bothered to have seen the previous 3. I don't state this with any particular pride but I had been waiting on this film for sometime. Yes, I had seen the other 3 countless times and they are top notch action films (minus 3) in their own right but they always had more of a cult following. This made being openly affectionate about the films difficult as they aren't in the pop culture conscious as much as say Star Wars, Harry Potter, LotR etc.
This film had a rough time getting to the screen it seems. It had been filmed and wrapped up probably 2 years before it's release it would appear. So when that initial thunderous trailer arrived, I was more than excited for what was going to come out. And with added build up towards it's release date, excitement grew. Not only does this film take my No.1 spot for its out-right acion, tension, world building, performances by the leads, great (and ugly) characters and a director who really gave us a film that said "this is how you do a car chase, Hollywood"; it was a film that lived up to its hype!
Over the passed few years, my favourite films have often come out with me having little personal attachment or investment in the excitement of their releases. Some have taken me by surprise and some have simply lived up to what I had heard. When a film did appear that I had hyped up it either failed to deliver at all or just couldn't live up to a rather unrealistic level of expectation on my part (again Prometheus, sorry). THIS DID. This was 2015 in all its visual and audible glory!!!

My honourable mentions shall go to the following; Inside Out, John Wick and a documentary I Am Big Bird: The Caroll Spinney Story.

My bottom 5 this year aren't really aweful films. They were just the ones I happened to see that weren't up to scratch for my liking or fell well short of expectations (except no1):
5. Maggie, 4. SpongeBob Squarepants: Sponge Out of Water, 3. Terminator Genysis, 2. Jupiter Ascending and 1. Sharknado 3


See you for next years countdown!
Posted by Mark Button Design at 06:53 No comments: