That time of year! My Top 5 of the year. As always Im only including films Ive seen so apologies on missing any...

5. The Way Way Back
- can't beat a good coming-of-age movie and this did it form me. Sam Rockwell is on fire

4. Mud
- the Matthew McConaughey revival continues. Better than Killer Joe in my book. Enthralled all the way to the end!

3. Man Of Steel
- probably the 'Prometheus' of 2013. A film I hyped for ages. Love the character. They took a different direction with it which Im happy with. just wish they had managed to keep John Williams score...

2. The Worlds End
- the work from Pegg/Wright/Frost has become something of a point to make when stating our great comedy exports from the UK. Hilarious film, great ending to the themed trilogy and lived up to expectations for me.

1. Gravity
- no surprise here. Stunning. Great in 3D. A gripping thrill ride and for the first time in a long time there was stuff in there that I was left wondering 'how did they do that?'

Honourable mention doesn't really go to one film this time. Saw a bunch of films I was pleasantly surprised buy and really liked; The Wolverine, Behind The Candalabra and The Kings of Summer all great movies to check out.

Didn't have a complete bottom five thankfully as I missed as much of the crap as I could but here are 2 that were pants regardless;
Sharknado. 'So bad it's good'. No just bad guys. If I want to see a stupid low-fi B-movie of the today I'll watch Sharktopus with Eric Roberts. Texas Chainsaw 3D; was willing to give this a go. How bad can it be... pretty rubbish and so incorrect with things. Crazy...

On to 2014!!! I expect 2 films in my top 5 already so if this goes tits up Im not going to have a good year. Godzilla and The Lego Movie! See you in the new year

Posted by Mark Button Design at 12:22 No comments:

Email ThisBlogThis!Share to TwitterShare to FacebookShare to Pinterest
Labels: film, top 5 of

'Ancient Yeti' was the theme of the day... 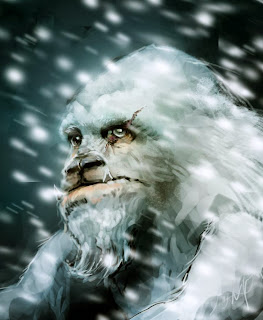 Posted by Mark Button Design at 11:51 No comments:

Two for one today.
Looking through my files and found something I hadn't shown before. It was called Waste City apparently.

Also just to say a Merry Christmas to everyone and see you on the flip side. 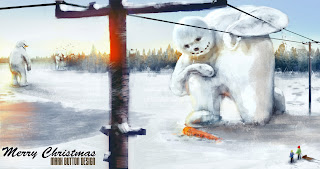